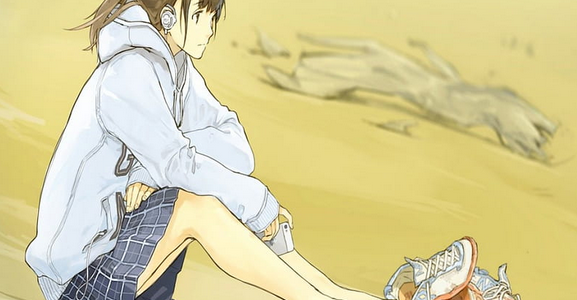 Feeling HOT HOT HOT! It’s not just a Buster Poindexter song, it’s the temperature outside too! The wind feels like the blast of a hair drier, walking down the sidewalk feels like climbing into an oven, and even taking refuge in what little shade that can be found is still swelteringly hot. Looking into the distance, the buildings along the street seem to dance and wobble in the waves of hot air as if they already have heat stroke. This is the dead of Summer, with a strong emphasis on Dead! Not even the blessed air conditioner set to “Polar Vortex” can do much to relieve the discomfort of this scorching season.

While the weather in the Northern hemisphere is getting roasty toasty, it’s not the only thing a bit warm under the collar. These anime are so hot they take place in a desert! So whether you love to bask in the glorious inferno of Summer, or would simply like to see some anime that understands the hot muggy misery you’re feeling, here are some anime that are just too hot!

The anime Trigun is a sci-fi western about a wanted man named Vash the Stampede. He’s personally responsible for the destruction of a whole city, many smaller towns, and even blowing a chunk out of the moon! There’s a good reason there’s a $$60 Billion bounty on his head, he’s one bad guy! Except, that he really isn’t. Though everyone on the desert planet of Gun Smoke is gunning (literally) to get Vash, he doesn’t hold anything against the humans that crash landed and then settled on the hot dry planet. In fact, he’s a big softy that has spent his many years, drifting from town to town doing what he could to make sure people didn’t die. But with so many bounty hunters after his head, keeping the collateral damage down could be pretty tough!

Trigun is an older anime that came from the “Golden Age” of anime in the early 2000’s. The same era as Cowboy Bebop and Outlaw Star. And much like those other anime, Trigun is highly inspired by the gunslinger Western movies of the 1970’s. Much like those Western movies, the location of the story is more than just a coincidence. The desert background sets a mood of lifelessness and desperation. Planet Gun Smoke is a harsh place, and the desert environment makes that abundantly clear. In such a hard place to survive, it pushes it’s characters to do things that they might not otherwise do. For example, Vash is often on the run from vicious bounty hunters, yet in one episode, it’s not the heavy weapon toting, highly trained killer bounty hunters that catch Vash, but rather a poor and scared village woman with a rusty old pistol. She has a sick child at home and she’s desperate for money and relieve, so she catches Vash and tries to turn him in.

Rust Eater Bisco is an anime about an outlaw Mushroom Keeper and a charity clinic doctor as they travel across a post apocalyptic landscape evading the law and trying to find a cure for a mysterious plague know as rust. Mushroom Keepers are seen as terrorists because it is generally believed that they are responsible for the spread of the rust. Because of Bisco’s activities trying to find the real source of the rust outbreak and his habit of blowing things up with his mushroom growing techniques, he is a very wanted person. Milo is a doctor for a charity clinic, due lack of a cure for the rust disease and the his older sister’s serious condition from the rust, he decides to team up with Bisco to find the cure at any cost.

Though Bisco and Milo travel through a wide variety of terrains in their search for a cure and the source of the rust, the most prominent is the desert wasteland seen in the beginning of the series. Much like Trigun, the mood of Rust Eater Bisco is definitely communicated through the environment that the characters are in. The terrain mimics the rust disease, just as the rust wears away and degrades everything it touches regardless of whether it is human or metal, the scenery too is worn away, left barren and lifeless. Even if the characters themselves don’t talk about it, it’s clear just from the look of the location, that this place is destitute.

The anime Gurren Lagann is about a boy named Simon that has lived his whole life in an underground village. Most of his life was spent digging new tunnels and mining for things. One day while digging he finds a special drill bit and a short stumpy mecha or Gunmen. His friend and mentor Kamina tells him stories about his aspirations in the world above ground. After Simon’s village gets attacked by another mecha, Simon powers up the mecha that he found, defeats the attacking Gunmen (and inspired by Kamina) the two take the mecha and escape the underground village and seek adventure above ground! But above ground isn’t exactly an oasis. In fact, it’s a strange and hostile desert filled with strange and hostile mecha using creatures! But the Simon and Kamina are not deterred and vow to try to make things better.

The Boy and The Beast: A Magical Tale Lost in Translation

Anime: To Binge or not To Binge? That is the Question!

Anime of the Young at Heart: Elderly in anime!

Drawn to Anime! A Return to Art!

HiDive: Plunging into a Pool of Unexpected Anime!